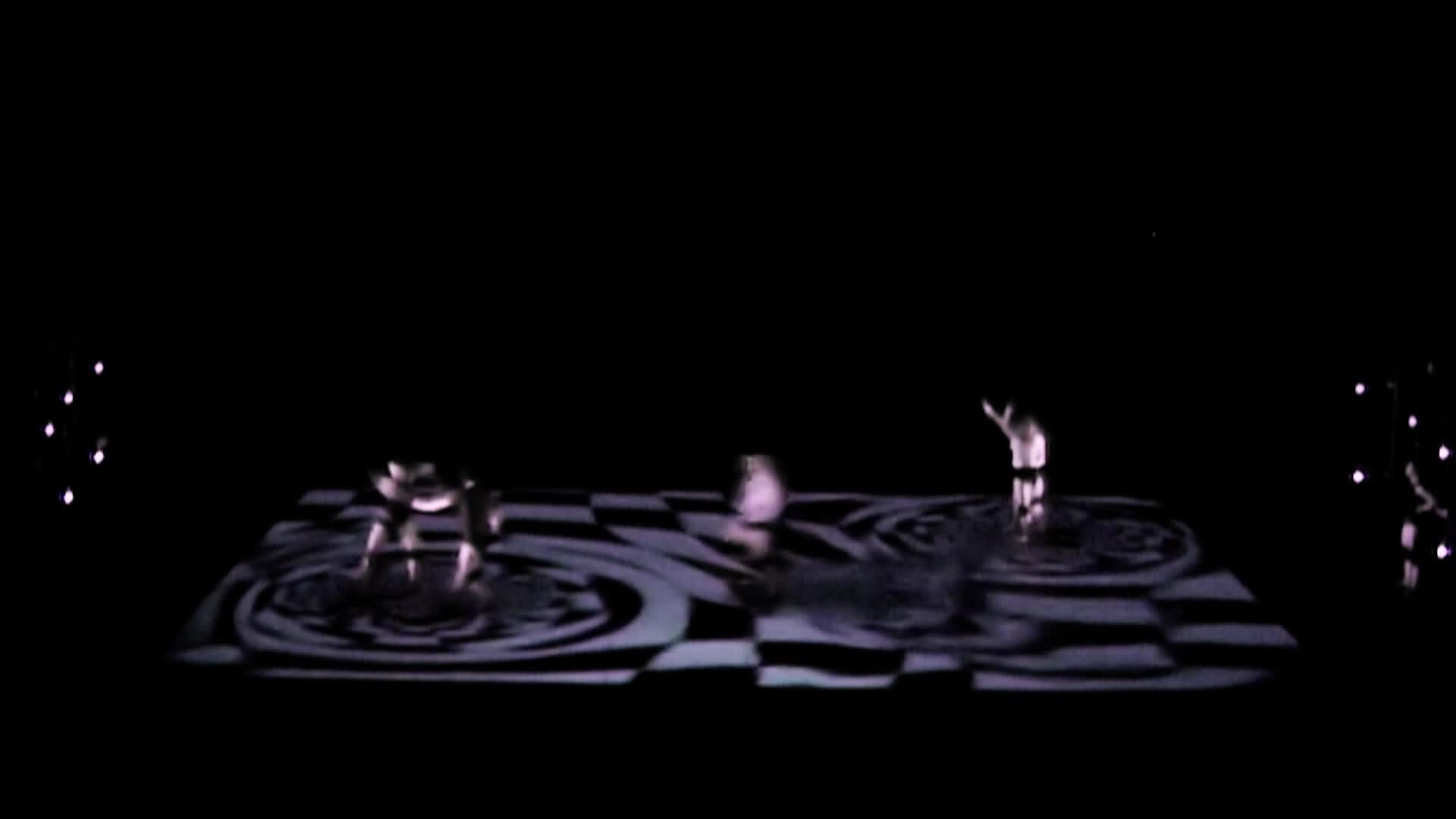 Inspired by associations from Stockhausen concerning "Mittwoch aus Licht", this scenery for Ballet Preljocaj was completely based on algorithmic images, introducing the human element only in the form of the dancers' movements in an attempt to melt reality and virtual space.

"God exists because mathematics are free of contradiction, and the devil exists, because we will never be able to prove it." Betrand Russell

Right from the start my attention was drawn to the energy of different constellations within Preljocaj's choreography and II started to imagine that the dancer's bodies should play on a visual instrument that stretched out between their bodies. The floor of the stage should become the playground of an abstract, flexible space, on which the dancers initially often enough lost their necessary orientation.

By their presence and movements, the dancers on stage affect a virtual, projected world underneath their feet. They are dancing inside of a scenery that reacts on every move that they make. Dancers and stage thereby form an inseparable unity. The floor becomes movable and participates in the event; stage and dancers no longer appear earth-bound.

Technnically spoken, the dancers are captured by an infrared-sensitive camera above the stage and their movements are tracked by a computer. This information influences the mathematical parameters of several worlds reprojected on stage. Among the virtual worlds, some are based on physics, like a wind channel or some kind of a liquid, while others are completely artificial by nature.

The observer not let into the interactive nature of the scenery may be puzzled by the closeness of video and dance. In Stockhausen's Helikopter-Quartett, the human reacts on the machine, the sounds and vibrations of the rotors. Here, conversely, the machine reacts on the human, and this counter-movement hopefully forms a circle that Sockhausen began.

still video images of the premiere

My work is always different, given that the main component of my work is the human being, who perceives and modifies visual and sound language in a way that I can never anticipate. In this process, the only thing that I can do is impose and modify the perception that the observer has of him or herself, and of others. In my opinion, my role consists in reacting, in transforming and emphasizing the human element.

Language is the key word behind my thought process. Over the past years, I have become totally fascinated by information, in every form. I have begun to read our surroundings like a book, deciphering the surroundings like an archaeologist or a detective. Everything that we do conveys a message, and the way that we express what has to be said is so varied that it overwhelms me. I do not claim to study computer science. I study the art and theory of information. Computer science primarily concerns itself with the quantity of information, whereas the art and theory of information deals with the quality.

I am mid-way between art and technology. All of my efforts seek to use technology to the point where it becomes art. At the same time, I struggle against technology taking me to the point where it takes over, at the expense of art. Ideas are the most important thing in our work. Man understands ideas, machines don't. However, if art cannot bring machines to feel emotions, who or what can? I am going to try.