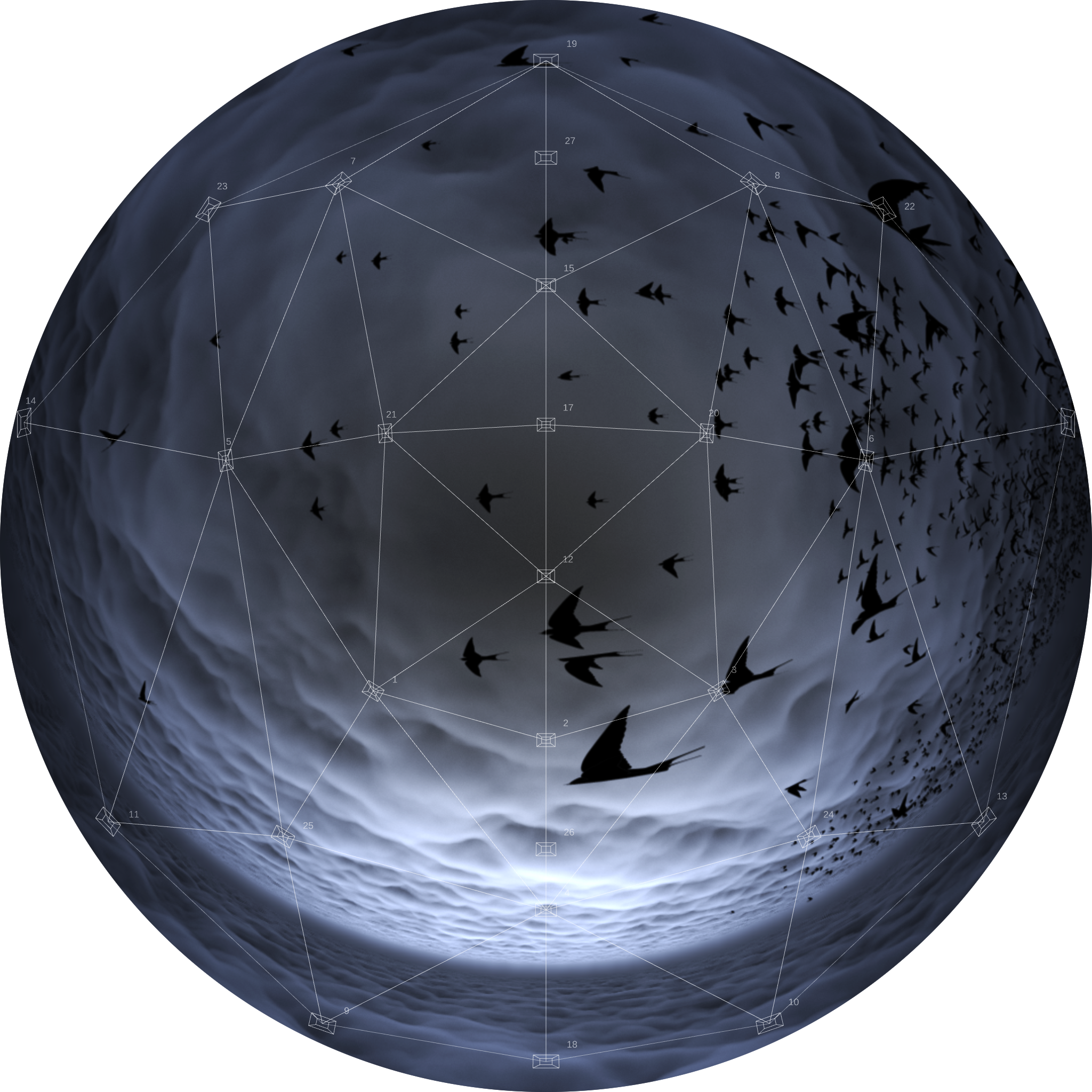 simulation of the installation

How do you move through crowds or with them? Does our own behavior resemble the one of flocking birds or schools of fish? What could we create or destroy in this way? And how does it feel like to be inside or outside of a group?

In this guided experience, I create several virtual environments in which the audience can experiment with being part of a crowd or herd, an image or consciousness. Up to 150 members of the audience can interact with the images of the dome projection by the use of laser-pointers, thereby exploring different forms of group behavior.

I’ve been interested how certain groups of living beings behave together under special circumstances for a long time. To protect each other, find something to eat more easily or attack an enemy. The possibilities of cooperation can be found in a big part of life on earth, be it insects, plants or people. It happens even between species.

Personally I have respect for large crowds of people, sometimes I even fear them. But I also know the feeling of being absorbed or feeling safe and secure within a group of people. For this experimental interactive work I especially create two sides of group behavior to allow the audience two different kinds of experience: To be a part of a confronting group and to become a part of a cooperative swarm or hive. I expect the second task to be more difficult.

Regarding group behavior, the term “emergence” was an important discovery. It describes the surfacing “of new properties or structures of a system as a consequence of the interplay of its elements” (translated source: German Wikipedia 2019). The term was coined in order to explain consciousness but was then applied to many domains, among them Biology and Sociology. In respect to swarms or crowds of people, given only slight changes in the behavior of individuals, very different forms of group behavior may arise.

The phenomenon of emergence also exists in Mathematics and Physics. For example, to calculate a Mandelbrot-Fractal from certain inputs, you repeat simple calculation steps thousands upon thousands of times until the result is evaluated. This procedure can create quite natural looking, complex forms. Likewise, flocking behavior can be simulated if a few simple rules are followed by the participants of a swarm. This does not mean though that animals in swarms actually behave by following such rules.

In this work, I want to give people a feeling for the creation of complex behavior from simple rules and for the observation that sometimes a complex being can become a simple actor in a group. I can not yet assess if this experiment works. It’s worth a try in any case.