The artist group zentralin consisted of six students with different focuses in the fields of media art, computer science and scenography. The goal of the group was to open up different emotional perspectives on the same media information around us. Live content of television and internet-based news were analyzed and emotionally commented on by multiple works of a collective installation. The diverse and in parts opposing emotional composition of the works by several authors corresponded to processes inside of the group. 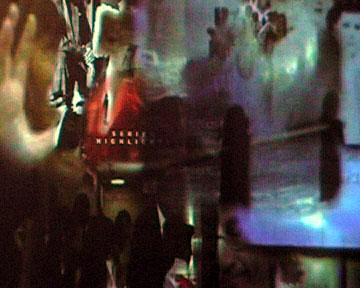 Incoming content, i.e. videos, images, texts and sounds, were not only recycled and treated aesthetically. In addition, media content and behaviors created by the artists that were stored in an associative memory were triggered after an evaluation of the incoming data streams. Parts of the stream were classified in real-time by a neural network. General mood and subject matter were determined. This qualitative classification formed the basis of zentralin03.

Three installations in one room presented three different perspectives on current ticker news and TV-stations. The room was put into a positive mood by a light and sound installation. The intensity of this underlying mood followed the emotional content of incoming news. A TV with aggressive sounds displaying a flickering close-up of an eye formed a negative contrast to this generally positive mood. It pointed towards a third work in the room that extracted objects from picture streams and presented it as a collage with partly conflicting contexts. 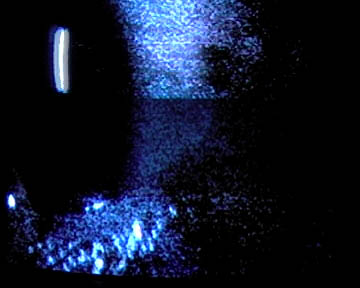 In general, this work was the sum of a multitude of single reactions from the group members, who reflected on a growing mechanization of human communication and human reality.